It was on 15 May 1948 that Israel was created followed by a series of campaigns to expel the Palestinians from their homeland. On 15 May of each year, Palestinians mark their displacement by commemorating the day as al-Nakba (the Catastrophe). This year 15th May almost corresponds with 27 Rajab (seventh month of the Islamic calendar) when, according to the preferred opinion, the Night Journey of Isra (from Makkah to Masjid al-Aqsa) and Mi`raj (ascension to Heavens) transpired. I would like to briefly touch on the importance and status of Jerusalem and Palestine in Islam and in the lives of each Muslim.

Foundation – The city of Jerusalem houses one of the holiest sites of Islam, the al-Aqsa Sanctuary. The Masjid al-Aqsa, in Jerusalem, is the second masjid (house of Allah) built on earth 40 years after the Ka`bah in Makkah by Adam (A.S). It was rebuilt and reconstructed afterwards by Ibrahim and his son, and, Dawud and his son, Sulayman (May peace be upon them all).

Blessed Land – The land and the whole area has been “blessed” by Allah and is “Holy” as mentioned in the Qur`an. It is referred to in the Quran, directly or indirectly, almost seventy times. Allah has endowed physical and spiritual blessings on the land from which all humanity can take benefit. According to a prophetic tradition, the al-Aqsa Sanctuary is “the land of resurrection and doomsday”. Furthermore, the Al-Aqsa sanctuary was a place of retreat and meditation for several prophets, including Adam, Ibrahim, Is`haq, Dawud, Sulayman, Zakariya, Yahya (A.S) and also Maryam (R.A), mother of Isa. Many companions of the Prophet travelled to the Holy Land to visit the sacred places. These included Abdur al-Rahman ibn Awf, Abu Darda, Abu Dharr al-Gaffari, Bilal ibn Rabah, Khalid bin Walid, Muadh ibn Jabal, Mu`awiyah ibn Abi Sufyan, Salman al-Farisi etc. Many of the companions died and are buried there too. This legacy was maintained by numerous scholars who were born and lived in this blessed land of al-Quds (Jerusalem) including: Imam al-Shaf`i – born in Gaza; Ibn Hajar al-Asqalani – lived in `Asqalan; Ibn Qudamah al-Maqdisi – lived in Nablus; Musa ibn Nusayr, the conqueror of Spain – lived in Hebron. The famous scholar Imam al-Ghazali also used to teach in al-Aqsa sanctuary and apparently wrote part of his famous treatise Ihya `Ulum al-Din within the sanctuary. 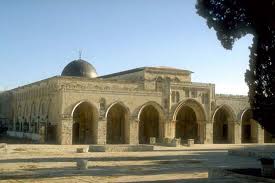 Al-Isra and al-Mi`raj – About one year before the hijrah (migration to Madinah), Allah took the Prophet by night on a miraculous journey from the Ka`bah in Makkah to al-Aqsa Sanctuary in Jerusalem (al-Isra), mounted on celestial animal called al-Buraq, accompanied by angel Jibra`il. It was in Masjid al-Aqsa that God assembled all the prophets, from Adam to Isa (A.S) for the prayer led by Prophet Muhammad (PBUH) himself. This is the only known ground on earth where all the prophets observed prayer together at one given time. The Prophet thereafter ascended from the precincts of al-Aqsa to the heavens (al-Mi`raj) in body and in a state of wakefulness. It is on this occasion that the Prophet and his ummah received the gift of five time daily prayer. When the prophet reported the night journey the next morning to the Makkans, they did not believe him. God displayed the blessed land in front of the Prophet and he began to describe it to them while he was looking at it.

The First Qiblah – Masjid al-Aqsa, in Jerusalem, was the first qiblah (direction of prayer) for Muslims. The Prophet and his companions prayed facing Masjid al-Aqsa (in Jerusalem) throughout the Makkan era and for sixteen or seventeen months in Madinah until the qiblah was changed to Ka`bah (in Makkah).

Visiting Masjid al-Aqsa is an authentic sunnah – The Prophet (PBUH) himself visited the Sanctuary on the journey of Isra` and also exhorted the believers to visit this blessed land. The Prophet (PBUH) said, “Do not undertake a journey except to three mosques: this masjid of mine (in Madinah), Masjid al-Haram (in Makkah) and Masjid al-Aqsa.” Furthermore, He (PBUH) also said, “If anyone adorns an ihram for Hajj or Umrah from the al-Masjid al-Aqsa and then proceeds to al-Masjid al-Haram, his former and latter sins will be forgiven, or [the prophet said] he will be guaranteed Paradise.” Thus, many companions adorned their ihram from al-Aqsa, including, Umar ibn al-Khattab, Sa`d ibn Abi Waqqas, Abu Hurayrah, Abdullah ibn Abbas, Tamim al-Dari, Amr ibn al-As etc. (may Allah be pleased with them all)

Spending towards al-Aqsa Sanctuary – The Prophet was asked about Masjid al-Aqsa (Jerusalem). He replied, “Visit it for prayer”. He was further asked, “if one of us cannot visit it, what should we do?” he replied, “if you cannot go for prayer then send some oil to be used in its lamps; whosoever gives oil for its lamps, will be [in reward] as if he has prayed in it.”

Importantly, the sacredness of the Holy Land is associated with the whole place and land and not just with a building within the sanctuary or city of Jerusalem. We should therefore pray for the preservation of the land, make a firm resolution to visit the blessed land, and assist the land and its people in whatever way we can do so. May Allah increase us in our knowledge, love and dedication to the Holy Land. Ameen.